For 10 years, a group of college friends met at Randol Mill Park in Arlington, Texas to throw batting practice to each other. We did this at least once a year, and in the early days, when we were all still in school, it was more like twice a week. 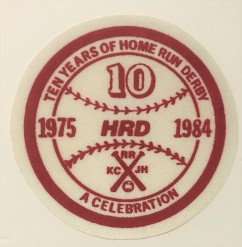 This was ostensibly called Home Run Derby, after the 1959 TV show, but the joke was that, because none of us had much power, there were only a handful of home runs hit at Randol Mill. This despite the fairly small diamond we used — roughly 305 feet to the left-field foul pole, and probably about 360 feet to straightaway center.

In all the years we did this, I hit one (1) home run, to center field. It went over by about three feet, and I imagine Rick, my roommate, could have jumped and caught it, were he so inclined. So let history record it as a mighty blast. Maybe I was channeling Duane Kuiper a little bit.

HRD at RMP (we were big on three-letter abbreviations in those days) was a good workout, because often there were just three of us: a pitcher, a hitter, and a fielder. And on those hot Texas days, the postgame Gatorade (in glass bottles!) tasted mighty good as we collapsed, exhausted, in front of the local 7-11.

But throwing all that BP meant we all had pretty good control, our arms were strong, and we became better hitters just from the sheer volume of pitches we saw. And that’s where it got through to me — finally — that line drives and base hits were my “thing” and not harmless fly balls. I think the phrase “warning-track power” may have been invented for me.

The best part of HRD, though, was the sheer joy of being in the ballpark. In those days, RMP truly WAS a public park: we could use the field anytime there wasn’t a game or practice going on. And because our class schedules gave us many free afternoons, we would go there at perhaps 2 in the afternoon and have the place to ourselves for an hour or two.

We would imitate MLB stars’ funky stances (Pete Rose, Carl Yastrzemski) or throwing motions (Mickey Rivers, Kent Tekulve) and generally shower each other with verbal abuse — especially if one of us had a bad day with the bat. Keith was nicknamed Windbreaker, because he was always trying to “jack it” (jacket). Weak ground balls or popups got a cry of “for God’s sake, show me some POWER!” That sort of thing.

I moved from Arlington to Cincinnati in August 1980, so HRD became a yearly event after th

at, though we did convene a special session in Minnesota on my wedding day in 1982. One of the balls we used is shown on my Facebook page and business card, complete with “HRD ’82” marking. And for the only time, I hit TWO home runs that day. Maybe I was a little jacked up, or it was a small park.

And in 1984, we sort of sensed this would be the swan song for HRD, so I had commemorative jerseys and sleeve patches made up for the occasion (see photo). And so it went.

The saddest part was not that HRD ended, but that in later years, when we went back to RMP, the fields were locked, and you had to have a PERMIT to use the field at all. In a public park!

For 10 years, all it took was a phone call or two, and we would meet at the field and have all kinds of fun — and we became better players as we shared our love of the game.

It’s a damn shame that can’t happen anymore. I’m glad I was part of it, though.