The Incredible Emu has an incredible year

After several years in the Cleveland Indians organization, Jim Kern was traded to the

Texas Rangers after the 1978 season. He responded with one of the greatest and most-underappreciated seasons a relief pitcher has ever had: 13-5 with a 1.57 ERA and 29 saves and 136 strikeouts in 143 innings pitched. I talked with Jim about that special season, and how it came to be.

What was your reaction to being traded away from Cleveland?

When I got traded to the Rangers, I couldn’t have picked a better team that I wanted to be traded to. I really enjoyed playing in Texas.

But almost immediately, your role was in question. 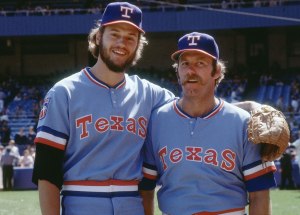 had been the Cy Young Award winner. I knew that I wasn’t going to be the short-relief man.

That’s a potentially sticky situation. How was it worked out?

At a midwinter banquet in Texas, right after Pat Corrales had been named manager, Pat, Sparky, and me were having dinner, and getting to know each other. Sparky got up to take a leak, and Pat says, “Kernie, we got a problem.’ And I said, ‘No, Pat, we don’t have a problem. When you traded for Sparky, I knew I wasn’t going to be the short man.’

I told him, ‘It’s real simple: I played in the Cleveland chain for 11 years, and I played on two teams that finished over .500.  I want to win. I’ll do whatever you want me to do. I’ll be happy to be the middle man, and Sparky’s setup man or short man when he needs a rest. I’ll do any damn thing you want me to do.’

Pat really relaxed – it was a biggie off his chest. So I came back and said, ‘But I would like a few things:

‘I want to be able to grow my beard.’ Pat said that was no problem.

Then I said, ‘For three years, Frank Robinson wouldn’t let me throw anything but a fastball. After three years of challenging everybody in the world, every day, every pitch, I need to throw the breaking ball.’

He looked at me, and I could tell he was really concerned. This wasn’t going well.

I said, ‘Let me make this suggestion: Let me throw whatever I want to throw in spring training. At the end of that, if you think the pitch selection and the quality of my offspeed pitches [are lousy], then we’ll go back and address this again.’

So he looked at me and agreed.

It all worked out, it seems.

I think I pitched 24 innings and gave up one run, and there was never any discussion about pitch selection.

This was definitely a different Jim Kern than the guy who pitched in Cleveland.

fastball was coming. Suddenly this idiot’s throwing a changeup and a big swerve [2-7 curve ball] and it just hurt people’s feelings and they really had a hard time adjusting. They’re all looking for the fastball, and they’re looking silly on this other stuff. And when they start thinking about offpseed stuff, the fastball is another two feet faster.

You got off to a fast start.

What made the 1979 season different than the others? You had some good seasons with Cleveland before 1979.

It was a combination of the attitude that 1) I was someplace where they wanted me, instead of a team that was basically a tax writeoff, and 2) I was with a good team. We had more talent than anybody else in the league. It was an awesome team, but we just couldn’t put it together. We fell apart the second half of the season [the Rangers went 10-30 at one point]. It was really pathetic, and it really hurt.

You still finished the season strong, though the team did not.

Interestingly enough, Bill James said I was the best pitcher in either league that year; I was fourth in the Cy Young balloting and was 11th in the MVP vote. He also said I had the sixth-best relief season ever. Just an awesome year.

I saw you pitch many times that season, and you just projected the idea that when you came in, the game was over.

One of the bigger compliments I got was from Earl Weaver. Jim Palmer told me Weaver once said, ‘let’s get some runs before they get Kern in there.’

How did Sparky adjust to you getting 29 saves?

Sparky was an absolute class act. Remember, he had 13 saves that year, too.

His locker was right next to mine. He taught me how to be a relief pitcher. He told me that when you walk out of the clubhouse, the fans should not be able to tell whether you won or you got your ass kicked. Live in the middle, and be humble.