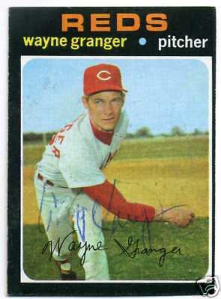 “When the game’s on the line, this guy is really something.” — Sparky Anderson

After a 4-2/2.25/4SV rookie season with St. Louis, right-handed sinkerballer Granger was acquired by the Reds in October 1968 with Bobby Tolan for outfielder Vada Pinson.

With the Reds in 1969, Granger posted a 9–6 record and 2.79 ERA with 27 saves in a then-National League record 90 appearances (144 innings), and he won the first of two consecutive Fireman of the Year awards.

In 1970 he set a National League record with 35 saves (since broken) while going 6–5 with a 2.66 ERA in 67 games. That season, he ranked eighth in the National League Cy Young Award voting.

In June of that year, he threw the final pitch and also earned the last victory at Crosley Field before the team moved to Riverfront Stadium.

During Game 3 of the 1970 World Series against the Baltimore Orioles, Granger surrendered a grand slam to opposing pitcher Dave McNally. It is the only time in World Series history that a pitcher has hit a grand slam. The Reds lost the best-of-seven series in five games, and Granger never again pitched in the postseason.

In 1971 he again led the league in games pitched with 70, posting a 7–6 record with a 3.33 ERA and 11 saves. After the season the Reds traded him to the Minnesota Twins for Tom Hall – another relief pitcher who did well for Cincinnati..

227 appearances and 329 innings in three years! Makes my arm hurt just thinking about that workload.

And while pitching for Huntington (MA) High School, Granger once struck out 30 in a 14-inning game.

That’s a durable pitcher. And Granger certainly was that during his time in Cincinnati. He was terrific, and he was rightly inducted into the Reds Hall of Fame in 1982.