Not a Jersey Guy, like my friends Neil Besougloff and Wayne Krenchicki, who embody what Jersey Guys are all about.

The Baltimore Colts were the first team I followed as a little kid, and they

had fabulous blue jerseys. John Unitas was and is the picture of what a quarterback should look like on the field, and it’s impossible to forget the image of #19 in that beautiful blue jersey and white helmet with the horseshoes on the side, taking a seven-step drop, cradling the ball by his right ear, getting ready to cut up a defense.

And Lenny Moore, #24, looked even faster and more graceful with that blue top and “spatted” white tape on his cleats.

Jim Parker (#77) and Gino Marchetti (#89) looked even bigger than the massive men they were when they put on those blue jerseys with the UCLA shoulder loops of blue and white.

In baseball, the Cincinnati Reds’ sleeveless flannel jerseys of 1961-1966 vintage are the gold standard — the most beautiful baseball uniforms ever.

I’ve been hooked ever since. And although I am not a collector in the strictest sense of the word, I do have a fairly large number of jerseys — most of which are game-worn — around 300 or so. (Hey, the “real” collectors sometimes have four or five times that many. I am a slacker by comparison.)

My jersey “thing” began in 1977 when I visited Cincinnati. I wanted a “real” Reds jersey so much I could almost taste it. I loved the uniforms the Big Red Machine wore, although I knew there was no chance of landing one.

Still I headed downtown to shop and hope. I randomly parked on Fourth Street, across from Koch Sporting Goods. And in the window was an authentic Ken Griffey jersey for sale.

I somehow managed to avoid being hit by a car as I sprinted across the street. And a

few minutes later, I walked out with an order for four Reds jerseys (two home, two road; gotta have spares for laundry day). The jerseys were $45 apiece; doesn’t sound like much today, but I was making about $3/hr then.

The rest is history.

I ordered a number of jerseys from Koch’s during the next few years, and eventually worked there in the mid-1980s. One of my duties was — of course — keeping inventory on our pro jerseys and making up retail orders for them, as well as taking care of the Reds’ and Bengals’ repair or callup jerseys.

I learned a great deal then, which helped a lot later.

Not much happened for a while after that; there were kids to raise. But later, I got started again — this time with San Francisco Giants jerseys — and I was building things up for what I eventually hoped would be a personal Hall of Fame or man cave.

I also bought a sewing machine at Goodwill for $15, and taught myself how to sew. I bought a heat press, material, and started making or altering my own jerseys.

Eventually I retired and we moved back to Cincinnati, and our house has a nice

A portion of the Giants section of my man cave

basement that I appropriated to display this stuff and have a work area to create more.

In this space I will show you what I have, and occasionally how I go about acquiring and modifying jerseys. I hope you find it interesting and/or amusing.

The Man Cave: A Quick Tour 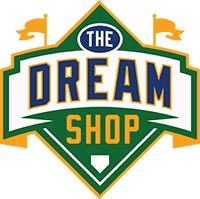